In many plants, leaves get modified to perform some special functions other than the normal ones, such as photosynthesis and transpiration.

Sometimes these modifications are in response to certain environmental conditions.

Some of the important modifications are given below:

Some plants of xerophytic habitats and members of the family Crassulaceae generally have highly thickened and succulent leaves with water storage tissue. These leaves have large parenchymatous cells with big central vacuole filled with hydrophilic colloid. This kind of adaptation helps plants to conserve very limited supply of water and resist desiccation (drying up).

In weak- stemmed plants, leaf or a part of leaf gets modified into green thread­like structures called tendrils which help in climbing around the support.

The parts of leaf which get modified into tendrils are as follows:

Leaves of certain plants become wholly or partially modified for defensive purpose into sharp, pointed structures known as spines. Thus, in prickly pear (Opuntia; fig. 4.25) the minute leaves of the axillary bud are modified into spines. The leaf-apex in date-palm, dagger plant (Yucca) etc., is so modified, while in plants like prickly or Mexican poppy (Argemone), Amercian aloe (Agave), Indian aloe (Aloe), etc., spines develop on the margin as well as at the apex. In barberry the leaf itself becomes modified into a spine; while the leaves of the axillary bud are normal.

Typically these are thin, dry, stalkless, membranous structures, usually brownish in colour or sometimes colourless. Their function is to protect the axillary bud that they bear in their axil. Sometimes scale-leaves are thick and fleshy, as in/onion; then their function is to store up water and food. Scale-leaves are common in parasites, saprophytes, underground stems, etc. They are also found in Casuarina, Asparagus etc.

In Bignonia unguiscati the three terminal leaflets of leaf get modified into claw like hooks which help in climbing (Fig. 4.29).

In case of Salvinia three leaves are present at one node. Out of these two leaves are normal and third gets modified into adventitious roots which help in floating over the surface of water (Fig. 4.30).

In Australian Acacia (Fig. 4.31) the petiole or any part of the rachis becomes flattened or winged taking the shape of the leaf and turning green in colour. This flattened or winged petiole or rachis is known as the phyllode. The normal leaf which is pinnately compound in nature develops in the seedling stage, but it soon falls off. The phyllode then performs the functions of the leaf. In some species, however, young or even adult plants are seen to bear the normal compound leaves together with the phyllodes.

There are about 300 species of Australian Acacia (Acacia moniliformis), all showing the phyllodes. In lerusalem thorn (Parkinsonia; fig. 4.32), a small prickly tree, the primary rachis of the bipinnate leaf ends in a sharp spine, while each secondary rachis is a phyllode being green and flattened. The leaflets are small and fall off soon. The phyllode then performs the functions of the leaflets. 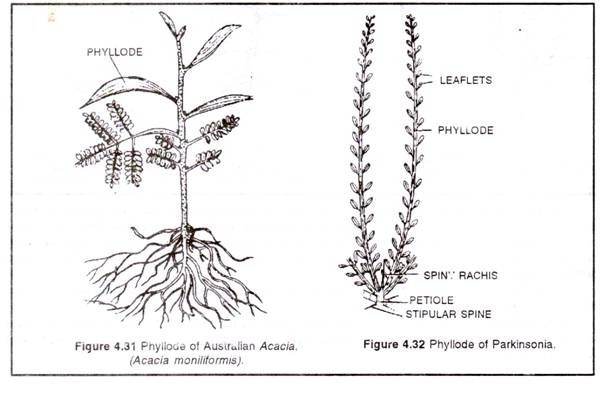 In insectivorous plants, the leaves are especially adapted to catch and digest insects to fulfil their nitrogen requirement. Some of the adaptations are given below.

This is a device to catch insects for fulfilling the deficiency of nitrogen in the medium where plant is growing. In case of Nepenthes, Dischidia and Sarracenia leaf-lamina is modi­fied into pitcher-like structure called leaf-pitcher.

Nepenthes (Fig. 4.33), also called pitcher-plant bears special type of leaves. Leaf-base is winged, petiole is tendrillar and lamina is modified into pitcher-like structure having a coloured lid which attracts the insects and keeps the pitchei closed during immaturity. The rim of the pitcher is internally lined by backwardly directed hair and a large number of minute scales due to which the insect slips and is captured.

The inner walls of the pitcher have glands which secrete a digestive fluid into the cavity of the pitcher. The insect is digested here and waste material settles down at the bottom. Sarracenia has pitchers in the from of rosetts. The pitchers are similar to those of Nepenthes but are sessile.

Pitchers are also found in Dischidia, an epiphytic climber. Rain water and debris accumulate inside the pitchers. The roots from the nodes of the stem grow into the cavity of the pitcher and absorb water.

Utricularia (Fig. 4.34) is another insectivorous plant which grows in water. It bears highly dissected submerged leaves. Some of the segments of the leaf are modified into bladders or utricles.

The lamina possesses numerous spine-like hairs spreading all around. Each hair has a shining sticky globule at its tip which contains digestive enzymes. These hair are very sensitive to touch. The moment an insect happens to sit on the lamina, the hairs of lamina bend and cover it completely leaving no chance for the insect to escape. The poor insect is digested with the help of enzymes present in the shining tips of hairs. The hairs return to their original position after the insect has been digested. Leaf: Characteristics, Types, Duration and Insertion
Structure of a Typical Leaf (With Diagram)