Plants and animals do not obtain food by the same processes.

Plants and some bacteria have the green pigment chlorophyll to help synthesize food, while animals, fungi and other bacteria depend on other organisms for food.

Based on this, there are two main modes of nutrition: autotrophic and heterotrophic.

The term ‘autotroph’ is derived from two Greek words—autos (self) and trophe (nutrition). In autotrophic nutrition, an organism makes its own food from simple raw materials. 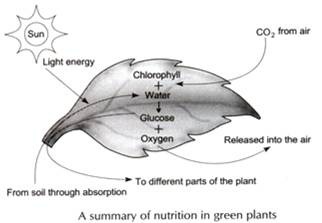 Though all green parts of a plant are capable of performing photosynthesis, the leaves are the most suitable organs for this process. The cells of the leaves contain special organelles called chloroplasts, which are the main sites of photosynthesis. These are plastids which contain the light-absorbing green pigment chlorophyll.

Chlorophylls are green pigments found in all photosynthetic organisms and are responsible for their green colour. In plants, chlorophyll is mainly found in the leaves. Young stems and fruits may also have chlorophyll. In lower plants like algae, the whole plant is green and takes part in photosynthesis.

Air contains about 0.03% of carbon dioxide. Terrestrial plants use atmospheric carbon dioxide in photos3mthesis. Aquatic plants use the carbon dioxide dissolved in water. Plants obtain carbon dioxide through pores called stomata present on the surfaces of leaves. The opening and closing of these pores are regulated by guard cells, which surround them.

Water is an important raw material for photosynthesis. Plants absorb water from the soil through their root hairs. The water is then transported up to the leaves through the stem.

Light energy is used in splitting water molecules into hydrogen and oxygen. The splitting of water in the presence of light is called photolysis.

There are two main stages in the entire process of photosynthesis. The first stage is dependent on light (light reactions). The other stage does not require light (dark reactions).

During these two stages, the following events occur:

1. Light energy is first absorbed by chlorophyll molecules found inside the chloroplasts.

2. The absorbed energy causes splitting of water molecules into hydrogen and oxygen. During this process the light energy gets converted into chemical energy.

3. Finally, carbon dioxide is reduced to carbohydrate (the end product of photosynthesis).

1. Experiment to demonstrate that starch is formed during photosynthesis:

You will observe that the leaf turns white, indicating that the chlorophyll has been removed. Now wash the leaf carefully in water without damaging it. Place the leaf in a dilute solution of iodine. This will turn the leaf bluish black. The changing of the leaf’s colour to bluish black after it has been treated with iodine solution shows that the leaf contains starch.

2. Experiment to demonstrate that carbon dioxide is essential for photosynthesis:

Get two healthy potted plants of almost the same size and place them in the dark for 24 hours to destarch the leaves. Now place them on glass plates. Cover the plants with separate bell jars. Keep some crystals of potassium hydroxide (KOH) in a Petri dish and place it under one of the jars. Make the set-up airtight by applying Vaseline at the bottom of the bell jars.

Keep the plants in sunlight for photosynthesis to take place. After 3 to 4 hours pluck a leaf from each plant. Boil the leaves in water and subsequently in alcohol, using a water bath, to remove chlorophyll. Now use a few drops of iodine to test for starch in each leaf.

Only one leaf turns blue-black showing the presence of starch. This happens because KOH absorbs the CO2 present inside one bell jar. As a result, the leaves do not get CO2 for photosynthesis. Thus the process of photosynthesis is inhibited and starch is not synthesized.

3. Experiment to show that sunlight is essential for photosynthesis:

Keep a potted plant in the dark for 24 hours. On one of the leaves, stick black paper strips (one below and one above the leaf) with the help of Sellotape. Now, place this plant in sunlight for a few hours. Pluck the leaf and remove the black strips.

Boil this leaf, first in water and then in alcohol, to remove chlorophyll. After washing the leaf with water, keep it in a Petri dish. Add a few drops of iodine solution. The leaf turns blue-black except in the region that had been covered. This region did not receive light and hence no starch was formed. The uncovered region received light and starch was formed due to photosynthesis.

Plants take up different nutrients like nitrogen, phosphorus, iron, magnesium, etc., along with water through the root. These nutrients contribute not only to the process of photosynthesis but also to the general development of the plants. For example, nitrogen is used in the synthesis of proteins and other compounds.

The word ‘heterotroph’ is derived from two Greek words—heteros (other) and trophe (nutrition). Unlike autotrophs, which manufacture their own food, heterotrophic organisms obtain food from other organisms. As heterotrophs depend on other organisms for their food, they are called consumers. All animals and non-green plants like fungi come under this category.

Consumers which consume herbs and other plants are called herbivores, and those which consume animals are called carnivores. After taking complex organic materials as food, heterotrophs break them into simpler molecules with the help of biological catalysts, or enzymes, and utilize them for their own metabolism.

Depending upon the mode of living and the mode of intake of food, heterotrophs may be parasitic, saprophytic or holozoic.

Parasitic organisms, or parasites, live on or inside other living organisms, called hosts, and obtain their food from them. The host does not get any benefit from the parasite. Different parasites, like Cuscuta (akash-bel), Cassytha (amar-bel), hookworms, tapeworms, leeches, etc., have different modes of feeding, depending upon habit, habitat and modifications.

Saprophytic organisms, or saprophytes, derive their food from dead organisms. They secrete enzymes that are released on food material outside their body. These enzymes break down complex food into simple forms. Common examples of saprophytes are fungi (moulds, mushrooms, yeasts) and many bacteria.

In holozoic nutrition complex organic substances are ingested (taken in) without their being degraded or decomposed. After intake, such food is digested by enzymes produced within the organism. Digested food is absorbed into the body and the undigested product is egested (expelled) from the body. This kind of nutrition is found mainly in non-parasitic animals—simple ones like Amoeba and complex ones like human beings.

Amoeba takes in complex organic matter as food. Amoeba first identifies its food. It then throws out a number of small pseudopodia (projections of cytoplasm, also called false feet). These pseudopodia enclose the food particle and prevent it from escaping. The food enclosed in the cell membrane forms a food vacuole.

The complex food is broken down into simpler molecules with the help of digestive enzymes of the organelle called lysosome. The digested food is distributed in the cytoplasm and the undigested food is egested through the cell membrane.

In Paramecium, a unicellular organism with a specific shape, food is ingested through a special opening, the cytostome (cell mouth). Food is brought to this opening by the lashing movement of cilia that cover the entire surface of the cell.

Human Digestive System (with Diagram)
Exchange of Gases in Plants

What are the three important components of biodiversity?Answer Now